It’s come to my attention that many of my peers are either not yet familiar with – or have given up on – Snapchat.

No longer an app solely used by teens to send indiscreet photos, the four-year-old social media platform has matured significantly and is now looking at some startling numbers: 20,000 (snaps shared per second), 6 billion (number of daily video views) and 12 billion (their most recent valuation, in USD). But if numbers aren’t your thing, here are a few reasons why you should download the disappearing message app right now:

Everyone else is doing it
Snapchat boasts 100 million daily active users which include a myriad of celebrities from Miranda Kerr (who happens to be dating the app’s founder, Evan Spiegel) to twenty-something “it” girls Kendall Jenner and Gigi Hadid, to DJ Khalid (we’ll come back to this), Rihanna, and even Justin Bieber.  Their Snap Stories allow a personal look into their lives by way of “effortless” selfies (Bieber) or 10-second videos of a super model’s Christmas Down Under (Kerr). 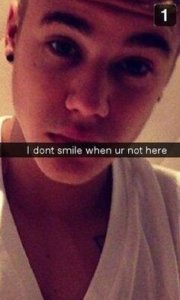 A recent New York Times article applauded DJ Khaled (you know him from this 2010 hit) for his uniquely positive and engaging approach to the platform. With an estimated 2 million views per post, one has to wonder how much Cîroc vodka is paying for an appearance in nearly every 24-hour story.

Stories are the new Instagrams
Snapchat Stories give users an opportunity to contribute photos and videos to one collective, comprehensive multimedia piece that lasts for 24 hours. Stories come in two forms – personal, which can only be viewed by the user’s friends, or collective, where Snapchat compiles random contributions made by its users. Right now, I’m watching a user-generated “Live” Snap Story of people in Bogota, Colombia. Can you think of a better way to peer into the lives of people living on the other side of the globe? 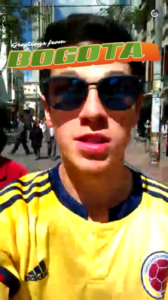 Discover
Another great feature of Snapchat is Discover, where top media outlets such like the Daily Mail, CNN, Vice, Refinery 29, BuzzFeed, Mashable, Vox, People, National Geographic, Food Network (you get the picture) post brand new content daily in succinct, shareable segments. A quick flip through the platform will give you updates such as the latest on the Middle East, a healthy taco recipe or your daily Kardashian briefing. The content is perfect for killing time on the MTR or a morning news digest. 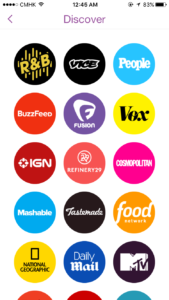 Brands want a piece of it, too
While brands like Cîroc are no stranger to the platform through celebrity seeding, Snapchat is making it easier for them to join (and in turn increasing their own valuation) through creative and non-intrusive advertising. The Discover feature allows for photo and video ads within specific media platforms, tailoring to the beauty junkie exploring Refinery 29 or the foodie flipping through the Food Network’s story of the day. Geofilter advertising has also recently appeared in the form of Coca-Cola and McDonald’s ads (sound familiar?), allowing users to filter their post with a hamburger and fries (see below) or a bottle of fresh Coke. 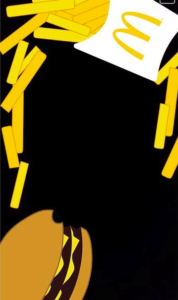 According to Business Insider, Snapchat’s new advertising offerings have signaled that they will be the “one to watch in 2016,” hinting at the possibility of the company going public before other mainstream tech platforms. The analysis even suggests that it might start to encroach on Twitter’s ad revenues, particularly when it comes to video content. 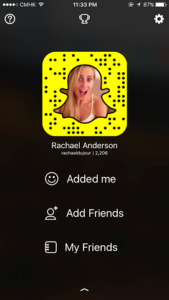 Add @rachaeldujour or scan the code with your Snapchat camera to follow me!

According to Business Insider, Snapchat’s new advertising offerings have signaled that they will be the “one to watch in 2016,” hinting at the possibility of the company going public before other mainstream tech platforms

Launching a new restaurant in Hong Kong: 4 ingredients for success
· 27 October 2015
NEXT
8 tips for hosting a successful PR event